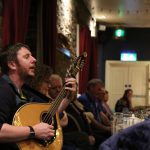 In what has already been a strange and unpredictable year, the emerging trend that has most taken me by surprise is the sudden surge in the popularity of sea shanties.

For reasons this auld fella may never understand, there’s been a resurgence of these nautical working songs.

How did all begin? Climb aboard and we’ll go on a quick adventure…

It all started when a young Scottish man’s rendition of the 19th century whaling song, Soon May the Wellerman Come – or The Wellerman as it’s become more popularly known – caught the attention of, well, everyone.

The Wellerman became a global sensation almost overnight and has even led to a record deal for the young folk singer, Nathan Evans:

The sea shanty craze may be short-lived or maybe it’s here to stay. Who knows?

Either way, I’m hopeful that it will lead a brand new audience on a musical journey of discovery and exploration that introduces them to the exciting world of Irish folk music.

Of course, folk music enthusiasts the world over already know the appeal of this genre. It’s a staple of many folk music traditions.

Such is its popularity in traditional Irish music that a Sea Shanty Festival takes place in Rosses Point, Co. Sligo each year:

But what is it that makes these folk songs so popular? The catchy melodies? The collaborative storytelling? The endless potential for close harmony?

They’re great singalong songs if you’re not into solo singing. Like all good folk music, the songs tell a good story and that’s really why they should be preserved, because they talk about the life of sailors at sea in the 19th century.
– Willie Murphy

Whatever the reason, it’s a welcome opportunity to re-explore some of my favourite folk songs and to introduce you to some of the best Irish sea shanties.

What is a Sea Shanty?

First things first. A sea shanty is not just any old nautically themed song. The term most commonly refers to 19th century working songs sung on board the ships of the transatlantic merchant navy.

These songs served a purpose – maintaining morale and synchronising the onboard labour. The coordinated shanties, with their call and response style, created a unified rhythm for the small crews to perform tasks.

For pumping, any old sea song or popular song would do, as long as it had a rousing chorus that everyone could sing along with. This is where much of the confusion relating to classifying songs as shanties originates.

Many of these sea shanties served multiple purposes, with the structure of the song changing to suit the needs of the crew at the time.

The shantyman, or foreman, was responsible for leading the sing and coordinating his crew. It was up to him to set the pace. Apparently a good singing voice could earn you a few extra bob on the job!

Sea shanties are a hybridised form of music. Ships, as you can imagine, were cultural melting pots. There is no denying however, a distinct Irish influence on the genre.

What Shall We Do With The Drunken Sailor for example – possibly the best known sea shanty in the world – shares its melody with the Irish folk song Óró Sé Do Bheatha ‘Bhaile.

How did this Irish influence emerge?

One of the most popular trade routes of the 19th century was Liverpool to New York – two cities famous for their large Irish immigrant communities.

It’s hardly surprising that a shipping route between two cities with such large Irish populations would be dominated by Irish crew members:

Many shanties had Irish tunes – dance, folk, and march – and not only were the words and phrases of many of the shanties of Irish origin but in some cases it was customary for the shantyman to sing the shanties with an imitative Irish brogue.

The Packet Rats of the Western Ocean Packets were almost one hundred per cent Irish… and as these seamen were responsible for many of our finest shanties it was only natural for them to choose tunes and words from Irish sources when they made up these songs.
– Stan Hugill

And as we Irish are prone to doing, everywhere we went, we brought our musical tradition with us. The high seas were no exception!

Leave Her Johnny Leave Her

Leave Her Johnny Leave Her is one of the best known sea shanties and one that is frequently sung in traditional Irish music circles.

It originally served as a capstan, halyard and pump shanty, depending on which format it was sung in.

It was most often sung at the end of the voyage however, during the last round of pumping, as an opportunity for the crew to vent any frustrations accumulated while at sea:

The ‘her’ in question was the ship, but there’s no denying it was a good idea to leave one’s grievances behind too before disembarking, tied up in the port with the ship.

This shanty is thought to have originated around the time of the Great Irish Famine.

One of my favourite versions is sung here by the iconic duo that is Tommy Makem and Liam Clancy. Though, it is perhaps a bit more sentimental than the original would have been:

Clear the Track, also known as Eliza Lee, began its life, believe it or not, as an Irish love song. This popular sea shanty shares the melody of the famous traditional Irish folk song, Siúl a Ghrá.

It travelled to America where it was sung by workers on the railroad network. Hence the reference to the Bulgine which was a slang term for a railway engine:

Hey rig a jig in a low back car,
A he, a ho, are you most done?
Eliza Lee all on my knee,
Clear away the track and let the bulgine run.

From there, it found its way back to the ports where it was picked up by ship workers and sung as a capstan shanty.

By this stage it had picked up a number of musical influences along the way however, most notably an African American influence from its time on the railways.

So while its roots are firmly Irish, the song itself should today be considered transatlantic:

We’re All Bound to Go

We’re All Bound to Go – also known as The Irish Emigrant Song or Heave Away My Johnny – is a song that served as an outward-bound brake-windlass shanty.

Sung to melody of a jig, the original version of the shanty, collected by Stan Hugill, tells the tale of a sailor’s misadventure on board a ship.

As with most shanties and folk songs however, several versions exist.

Some focus on the tough life of the crew member on board the packet ships, others, like the version below, focus less on the details of the trip and more on the act of leaving itself:

Fall Down Billy O’Shea is one of my favourite sea shanties of all time. I have a slight confession to make however. It’s not technically an ‘authentic’ sea shanty…

While it’s frequently used as an example of an Irish sea shanty, this iconic folk song was actually written in the 1960s by Dublin musician Iain McCarthy.

Written in the style of a sea shanty, it tells the tale of a sorry group of men who got drunk in Dublin city and woke up to find themselves bound for America as crew members:

Here it is, performed back in 2014 (before it was cool) by the brilliant Dublin folk group, Lankum:

To be fair, it doesn’t require a great stretch of the imagination to imagine this being sung by a hardworking crew onboard a ship bound for America.

The modern style of sea shanty performance that has emerged in recent years, most notably groups singing together in close harmony, isn’t really an accurate reflection of how these songs would have originally been sung.

There’s no denying that sea shanties lend themselves well to this particular style of musical performance however! And it’s definitely far more pleasant to listen to than some collective out of tune grunting aboard a ship.

If you’re lacking someone to sing harmony with however, there’s always instrumental accompaniment.

While the unique modal sound of the Irish bouzouki lends itself well to accompanying these songs, for a more authentic performance you could consider opting for the fiddle or concertina.

The English concertina in particular is strongly associated with the sea shanty tradition and offers the ability to play either chords or melody.

So if, like the rest of the world, sea shanties have stolen your heart, why not fully embrace the trend and help to keep this fine folk tradition alive. 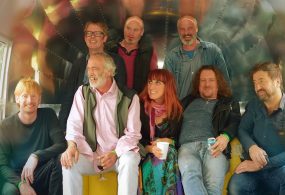 St Valentine’s Day – The Dublin Connection While there are not a whole lot of definitive accounts of St Valentin... 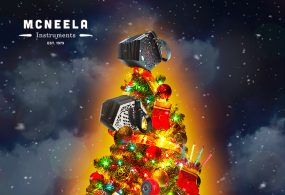 – Published: December 6 2020 Now more than ever, the world needs music. Music has been scientifically proven to ha...