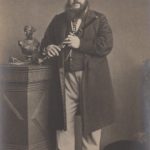 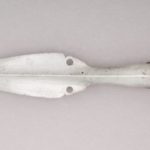 Liam O’Connor plays The Silver Spear on the Irish Fid

In our most recent concertina blog we mentioned the name of Elizabeth Crotty, a torchbearer for Irish concertina-playing during its darkest hour. But who was Elizabeth Crotty, or Mrs Crotty as she became more commonly known, and how was it she came to prominence in the male-dominated world of traditional Irish music?

From Clare to Here

Mrs Crotty was born Lizzie Markham in 1885. She was born in a small townland called Gower, in Cooraclare, in the beautiful county of Clare.

She was a musical child in a musical family. Her sister Maggie also played concertina and her mother played the fiddle. Lizzie was largely self taught.

Lizzie and Maggie played at various house dances, christenings, wakes and so called ‘American Wakes’. (A ‘wake’ held for a person who was emigrating to the US. The dramatic nature of the gathering was based on the belief that that person would never return to Ireland and was, for all intents and purposes, dead.)

At that time, house dances and the like were restricted to single or married men and single women. Married women were expected to keep house and refrain from these get togethers. Elizabeth, as a single woman until her late 20s, enjoyed a substantial taste of freedom attending social gatherings and dances as she pleased.

It was probably this freedom coupled with her late marriage (for the time) that informed her somewhat more liberated views on life. At 29 years of age, she married returned emigrant from the US, Miko Crotty (pronounced ‘Crutty’ locally). Her husband’s new world views. no doubt enhanced her own particularly progressive views on a woman’s place in traditional Irish music. 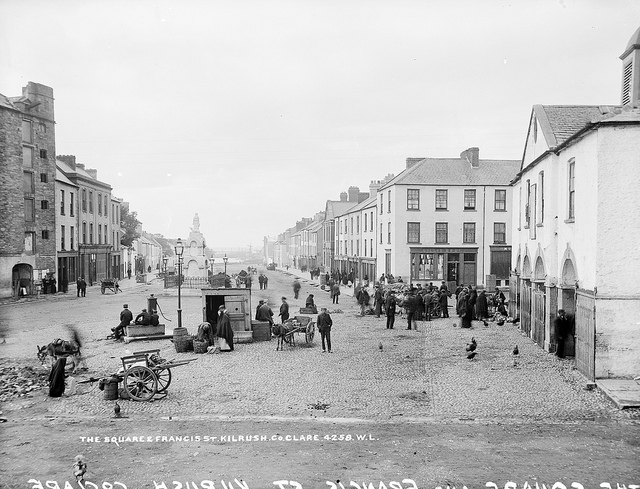 The Square in Kilrush circa 1903

Crotty’s of the Square

Elizabeth and Mika opened a pub together in Kilrush, Co. Clare. This establishment would become a beacon for traditional Irish music in Co. Clare and for Mrs Crotty’s own personal favourite, the Anglo concertina.

In fact, until the Dance Hall Act in 1935, the concertina and the fiddle were Co. Clare’s Irish instruments of choice. The status of the Anglo concertina changed as we now know, but Mrs Crotty kept up her concertina playing and probably used her position as proprietress of Crotty’s of the Square to take part or even lead plenty of music sessions.

Due to an ongoing medical condition, Mrs Crotty was up to Dublin on regular hospital visits. She would often combine these trips with visits to the Pipers Club on Thomas Street.

These visits led her into contact with a much wider audience of traditional Irish musicians. She became known and admired for her unique and unaffected style of playing which was seen as a hark back to simpler, purer times. This, coupled with her warm and energetic nature endeared her to many.

Have a quick listen to Mrs Crotty play here:

It was Mac Mathúna’s first outing in his new mobile broadcasting studio. He was so taken with Mrs Crotty that he frequently played her music on his radio show. This brought her music to a much wider audience, thereby cementing her reputation.

In 1954 Mrs Crotty was elected President of the County Board of Comhaltas Ceoltoirí Éireann (Society of the Musicians of Ireland) and the primary Irish organisation dedicated to the promotion of the music, song, dance and the language of Ireland. It is often referred to as just Comhaltas (kohl-tus)

Mrs Crotty never made a commercial recording and her work survives only in archives and through tunes she handed down.

In 1999 RTÉ released a limited edition CD of the music Ciarán Mac Mathúna collected. Titled ‘Concertina Music from West Clare by Elizabeth Crotty’, it’s been out of print since roughly 2008.

Sadly, it’s nigh on impossible to find recordings of Mrs Crotty playing online.

The Legacy of Mrs Crotty

Her music may be carefully archived in RTÉ but her spirit lives on in concertina players across the globe. There’s many a female Irish trad musician who would take a quiet moment to thank her if they could.

Elizabeth Crotty died in 1960 of a severe angina attack. The Éigse Mrs Crotty (the Mrs Crotty Festival) was set-up in 1998 to honour her music and her antique Lachenal with bone keys was often brought out and given another spin.

Michael Tubridy put his foot up on the stone surround, and played the air of An Droighneán Donn on Mrs Crotty’s own concertina, an ancient old Lachenal box fixed up with sticky plaster, its little keys looking like the stained teeth of an old animal. – Irish Times Aug 18, 1998

The festival has since been expanded to the Kilrush Traditional Music & Set Dancing Festival to include a wider range of music and dance; Mrs Crotty was also an avid set dancer and never let age or illness stop her.