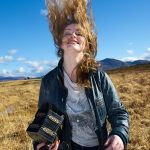 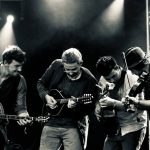 There’s no shortage of brilliant bodhrán players in traditional Irish music today. This once ridiculed and overlooked frame drum has gone on to become the heartbeat of Irish music. It’s a true rags to riches, zero to hero story.

I’m often asked who my favourite bodhrán players are. So I’ve put together this list of some of the best movers and shakers on the Irish percussion scene. You already know of my love and admiration for the fantastic Rónán Ó Snodaigh so I decided to shake things up a little.

I’ve chosen five of the greatest bodhrán players in the world for your listening pleasure. Some are legendary, others are on their way. Either way you don’t want to miss out on hearing these phenomenal Irish percussionists in action. They are guaranteed to inspire you to bodhrán greatness.

I’ll tell you about their signature styles and the impact they’ve made on the world of Irish traditional music. Learn where bodhrán solos came from (who’s to blame), and listen to the most imitated bodhrán riff in the world.

So what are you waiting for? Let’s get moving. It’s time to discover five legends of the Irish bodhrán.

Tommy Hayes has rightfully earned a reputation as one of the greatest bodhrán players of all time. He has been at the forefront of traditional Irish music for over thirty years. He was the original percussionist with Riverdance and has gone on to inspire countless generations of bodhrán players.

More than that however, Tommy Hayes exploration of percussion and percussion instruments from other cultures granted Irish bodhrán players the freedom to explore their own potential further afield. Tommy can just as likely be found playing the djembe, shakers, bongos or spoons as his beloved Irish frame drum:

A member of both Stockton’s Wing and Altan, Hayes has performed and recorded with most of the great names in traditional music and beyond. He has performed on more than 400 albums in numerous musical collaborations. His playing transcends genres and puts him in demand the world over as a percussionist.

In the video below he’s joined by Mattu Sarod on the Hindustani instrument, the sarod, for a performance that offers both a Celtic and Indian flavour:

One of Ireland’s Greats

Tommy’s “solo” albums however – An Rás and A Room in the North – are compulsory listening not just for burgeoning bodhrán players but for any percussionist. Featuring a veritable who’s who of some of the greatest Irish and Scottish musicians, these albums are evidence of why, to this day, Tommy Hayes is one of the greatest bodhrán players the world has ever known.

I’ll leave you with one of his more traditional tracks, but for the brave listener, there are some mighty musical collaborations on the rest of the album worth sinking your teeth into:

If you’re a regular follower of our blog, you might have noticed by now that I’m quite the Flook fan. It will come as no surprise then, to see their virtuoso bodhrán player, John Joe Kelly featuring on this list.

I think the most accurate description I’ve ever heard of John Joe’s playing is “to say Kelly plays the bodhrán, is like saying Mount Everest is a bit of a climb”.

Why not have a listen for yourself and see why John Joe has inspired bodhrán solos the world over? (Depending on your attitude to bodhrán playing, that’s either a very good or very bad thing…)

John Joe is a masterful player who has revolutionised the world of Irish bodhrán playing and captured the hearts of young bodhrán players everywhere with his exciting playing style. Even if you think you’ve not heard John Joe’s playing before, I guarantee you have – replicated in the styles of countless generations of bodhrán players.

The Highest Form of Flattery

John Joe is one of the most sought-after bodhrán players in the world today. As a member of Flook and Mike McGoldrick bands, he was definitely responsible for updating the bodhrán’s somewhat outdated image. His exciting, modern playing style has become legendary throughout the traditional Irish music scene.
One criticism John Joe faces is that his playing has become so popular that it’s inspired a few too many young bodhrán players to perfectly imitate his signature style. As a result, there’s now an entire generation of bodhrán players who all sound the same. That’s hardly poor John Joe’s fault though. What an honour, in my opinion, to be so celebrated and admired! It’s a well deserved distinction.
As they say, imitation is the highest form of flattery. Try as they might however there’s still only one John Joe Kelly:

Mel Mercier’s father, Peadar Mercier was the original bodhrán player with the revolutionary Ceoltóirí Chualann and went on to become the bodhrán player with the legendary Chieftains. It’s no surprise to learn then that Mel himself learned to play both the spoons and the bodhrán from his father. Mel continues to carry his father’s mantle to this day.

Despite growing up in a house full of music (The Chieftains would rehearse in the sitting room) it wasn’t until he was in his late 20s that Mel decided to become a full time musician. Surprisingly, it wasn’t from his father the inspiration came, but from friend and musical collaborator Mícheál Ó Súilleabháin.

Mel performed and collaborated with the gifted Irish piano player and composer for over thirty years. Together they merged classizal, jazz and Irish music, creating a sound that was distinctly theirs. In this musical duo, Mercier was not merely an accompanist. His percussion plays a vital role in their music collaborations:

It’s clear that Mel never saw himself as “just” a bodhrán player. (A phrase that pains me to hear!) He completed a Masters Degree in World Music Percussion at CALARTS in Los Angeles, where he studied African, Indian and Indonesian music. This love and knowledge of ‘word music’ has helped to expand his percussion playing beyond the boundaries of traditional Irish music.

His bodhrán and percussion playing has a unique sound that is perfectly described as “crispy”. Crispy also just happened to be title of a collaborative composition between himself and Mícheál Ó Súilleabháin, that was written to show off their highly impressive rhythmic abilities:

Mel Mercier is also famed for his work with another word renowned, innovative pianist and composer. Throughout the 1980s, Mel and his father performed with the American experimental composer John Cage performing Cage’s ambitious Roaratorio: An Irish Circus on Finnegan’s Wake in the UK, Europe and North America.

As well as being a gifted bodhrán player, Mel is also a talented composer who frequently writes music for theatre. His award winning, Tony-nominated underscoring has featured on both The West End and Broadway.

When I think of modern bodhrán playing, the first name that comes to mind is Eamonn Murray. I know you definitely can’t talk to a young bodhrán player these days without his name coming up. He’s idolised by the younger generation as someone who made bodhrán playing ‘cool’ (or ‘lit’ as the kids supposedly say these days). Personally I’m outraged that I wasn’t awarded that title myself, but I’ll let it slide for now…

Eamonn is the captivating bodhrán player with the effervescent Beoga.

If you’ve never listened to Beoga, well, they’re something else. They’re the pop royalty of traditional Irish music. Their zany, wildly creative music has been pushing boundaries for years.

They’ve played with the best of the best (including the RTÉ Concert Orchestra above). These days however, they’re probably best known for their collaboration with the king of pop himself, Ed Sheeran. We’ll forgive them for that though…

From Beoga’s very first album onwards, Eamonn Murray’s unique beats have captivated and inspired. His opening riff for the Prelude Polkas is potentially one of the most imitated in modern day bodhrán playing.

His playing is highly rhythmic and full of energy and drive. If you’re looking for lively playing, Eamonn’s your man:

Aimee Farrell Courtney is a young Irish bodhrán player from Ratoath, Co. Meath. She made her debut in Dublin’s National Concert Hall at the tender age of 8 and hasn’t looked back since.

Aimee went on to study music in TUDublin Conservatory of Music where she completed both her undergraduate and masters degrees. She was awarded the Leo Rowsome Gold Medal for Outstanding Traditional Performance and the Michael McNamara Gold Medal for Outstanding Overall Performance for her final year recital. This is no easy feat for a bodhrán player up against concert pianists and Ireland’s rising opera stars!

To add to her impressive list of awards, in 2010 Aimee was crowned the World Bodhrán Champion. It’s not hard to understand why. Have a watch of the video below to see her in full flight:

Aimee’s talent has been recognised by the greats. She’s toured and performed with Donal Lunny, Andy Irvine, Liam O’Flynn, Danú and the RTÉ Concert Orchestra. While she may not be a household name just yet, she’s definitely one worth knowing.

In addition to her astounding technical skill, Aimee’s strength lies in her phenomenal accompaniment skills. She could rival any musician with her electrifying solos, but she’s most often found listening intently and reflecting the needs of those she’s playing with, including the likes of Donal Lunny below:

Her playing is understated. With Aimee, there’s never a risk of being drowned out by furious beating of the drum. The influence of Tommy Hayes and Mel Mercier is evident in her superb ear and sensitivity to the music, but she has definitely developed her own signature style and sound. Best of all, Aimee is a talented and passionate teacher who is inspiring countless other young women all over the world to take up the bodhrán and challenge her title. Her musical legacy will be a great one!

If you’re feeling inspired, before you move on, why not check out our range of Irish bodhráns in the McNeela Bodhrán Store. We have a drum to suit every level and every pocket.

Feel free to get in touch with me if you need help choosing the right bodhrán. I’m always happy to advise! 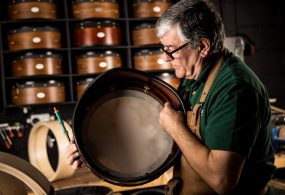