Concertina FAQ – The Difference Between the English, Duet and Anglo Concertina

The world of concertinas can feel very intimidating to the uninitiated! I frequently receive questions from confused prospective buyers asking for guidance:

What’s the difference between an English and an Anglo Concertina? Don’t they both mean the same thing? What is a diatonic concertina?  What key should I buy? What does C/G mean?

Well wonder no more! I’ve put together this handy FAQ to help answer any questions you have about this iconic squeezebox.

Let’s start at the beginning…

Who Invented The Concertina?

The first concertina was crafted by English scientist and inventor, Charles Wheatstone in 1829.

This concertina bears a resemblance to the current day English concertina system. It was an expensive instrument and only the very rich could afford it. This prompted the Germans to make a more cost effective concertina.

The first German concertina was crafted by Carl Uhlig of Chemnitz, Saxony in 1834. Originally called the Anglo-German concertina, its name was shortened to just Anglo. This concertina is the forerunner of the modern Anglo system.

Read more about how the Irish concertina tradition began.

How Do You Play the Concertina?

The concertina is a squeezebox with two ends. Pressing a button or key on either end while pushing or pulling the bellows causes a note to sound. Usually the left hand plays the lower notes and the right hand plays the higher notes.

You can rest the concertina on your lap or your left or right knee. You can tell which side a player favours if you notice more wear and tear on one leg of their trousers!

What is an English Concertina?

The English concertina is a unisonoric instrument which means that each button plays the same note on both the push and pull, like a piano accordion. It’s most commonly used for playing English folk music, though some use it to play traditional Irish music to great effect.

The English Concertina is fully chromatic. The two centre rows on each side are in the key of C and the accidentals (sharps and flats) are distributed between the outside rows.

English concertinas typically come in either a 30 button or 40 button model.

What is an Anglo Concertina?

The Anglo concertina is a bisonoric instrument, meaning each button plays a different note depending on whether you push or pull the bellows.

The Anglo is a diatonic concertina with most concertinas used for playing traditional Irish music typically tuned to C/G. This means the concertina contains all the notes required to play in the key of C or the key of G.

If you have a three row or 30 button model however, your Anglo concertina is also fully chromatic.

It’s arguably harder to master than the English concertina, but the Anglo is more popular for traditional Irish music due to the ability to switch quickly between notes with limited finger movement or button travel.

What is a Duet Concertina?

The Duet concertina is the lesser spotted of the three concertina types. It plays chromatically with the same note on the push and pull, like the English concertina.

The right side of the instrument contains the treble notes, while the left contains the bass notes. The middle octave is duplicated on both sides.

The tune is played with the right hand and the accompaniment with the left, hence the name duet.

Duet concertinas are usually much larger as they feature more buttons than either the English or the Anglo concertina. Sometimes up to 80!

Most serious duet concertina players will argue that you need a minimum of 58 keys to get the best of out of the instrument and fully display its versatility.

What Are the Most Common Concertina Keys?

Different styles of music favour different musical keys. As a result, the most common key for each concertina varies depending on style.

The most common key for Anglo Concertinas, especially for playing traditional Irish music, is the key of C/G.

You will also come across other key combinations such as C#/G#, A/D, Ab/Eb or G/D. The legendary Irish concertina player, Noel Hill for example, plays concertinas in A/D and Ab/Eb.

Specialist concertina makers can customise your Anglo concertina in the key you require.

The English concertina is most commonly found in the key of C.

The two innermost rows of the button layout (on each side) contain all the notes required to play a C major scale.  The two outer rows consist of the sharps and flats required to complete the chromatic scale.

Duet concertinas are available in the widest range of keys of all the types of concertinas. At their most complex they can span up to five octaves! 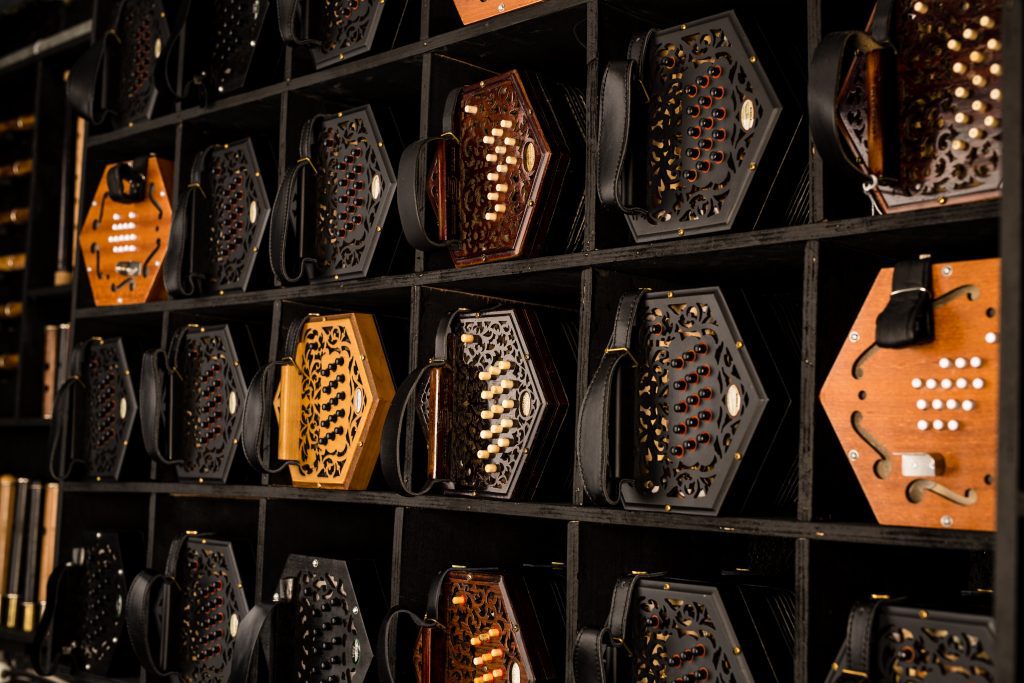 What is the Range of a Concertina?

This depends on the type of concertina. The size of the concertina and number of keys dictates how many notes it can play.

A 30 button Anglo concertina for example can span three octaves, playing from C below middle C, to C two octaves above. That’s a range of C3 – C6.

What’s the Difference Between a Treble, Baritone and Bass Concertina?

In addition to the three main styles of concertina – English, Duet and Anglo – concertinas can also come with different voicings:

Each voice covers a different range of notes:

Baritone concertinas sound an octave below a treble concertina and are a favourite for accompanying singing.

Bass concertinas play an octave below the tenor concertina (or two octaves below treble concertinas).

Tenor-treble concertinas cross the range of the both the treble and baritone concertina.

Is it Easy to Learn the Concertina?

Of all the traditional Irish instruments, the concertina is one of the easier instruments to learn. It’s possible to create a good sound, with very little effort, right from the beginning.

You can learn to play a scale quite quickly, and sounding a note is immediate.

Unlike other Irish instruments such as the fiddle, uilleann pipes or even the Irish flute, the notes on the concertina are already in tune and playable with a simple press of a button and a squeeze of the bellows.

The real challenge however comes next.

Mastering the concertina takes plenty of practice and musical skill. Many of Ireland’s greatest concertina players have devoted their lives to learning this unique little instrument and still feel they have more to learn.

Compare how easy it is to learn the Anglo concertina with the fiddle and the flute.

What is the Best Concertina for a Beginner?

The needs of a beginner concertina player will differ depending on which style of music you want to learn. It’s best to choose the most suitable instrument not just for you, but also for the music you want to play!

For traditional Irish music, the Anglo concertina is the most popular choice. Look for a 30 button, three row concertina in the key of C G.

For the best quality beginner Anglo concertina experience, consider the McNeela Swan Concertina. This reliable instrument will take a player from novice to accomplished very easily.

For English folk music, an English Concertina will do the job nicely. Not that there’s anything stopping you from playing any style of music on any style of concertina however.

A simple 30 button treble model or tenor-treble concertina will do the job.

Check out our Sparrow English Concertina or the Regondi English Folk Concertina. The Sparrow is perfect for beginners, while the Regondi is a more long-term investment that will see you right through to the advanced stage.

If it’s a Duet concertina you’re hoping to buy, take a look at Italian makers Stagi for their Hayden Duet Concertina.

Its layout is preferred by most beginners and the price is more affordable than other Duet concertina makers.

How Many Buttons Do I need?

If you’re buying an Anglo concertina to play traditional Irish music, it’s best to buy a concertina with at least 30 buttons. The same applies to an English concertina.

As I’ve mentioned above, duet concertinas are a different kettle of fish entirely. The most basic models usually start out with 40+ buttons.

20 button concertinas are fine for beginners, especially small children, but they’re not cost effective in the long run as you’ll need to upgrade to a more capable instrument. This is why I recommend starting out with a 30 button concertina.

How Much Does a Concertina Cost?

Beginner concertinas start at around €200, while vintage concertinas can reach prices of well over €7,000.

A good quality starter concertina will cost upwards of €400.

Be careful when looking for a concertina for sale. Don’t be fooled by overly cheap instruments.  Often, the price is a reflection of the poor quality of the concertina. Paying more now will save you money longterm.

For more information on the Anglo in Ireland today: the musicians, learners and buyers tips – click here.